Buccaneers cornerback Ryan Smith has been suspended without pay for the first four games of the 2019 regular season for violating the NFL policy on performance-enhancing substances. Smith will be eligible to participate in all offseason and preseason practices and games, but will not begin regular season action until September 30, following the team’s Week 4 game against the Rams. 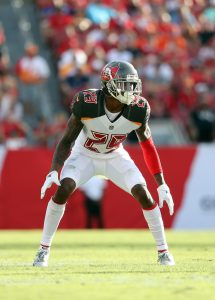 “We are disappointed that Ryan will be unavailable for the first four games of the season,” GM Jason Licht said in a statement. “We do extensive training and education for our players regarding the league’s polices, but ultimately each individual is responsible for what they put in their bodies.”

The ban could have a major impact on Smith’s future with the club. After earning a proven performance escalator last year, Smith is slated to earn a $2MM base salary in 2019. But, if the Bucs cut him, they’ll be on the hook for just $148K in dead money, resulting from his original rookie signing bonus.

The 2016 fourth-round pick has started 16 games over the last two seasons, but he was on shaky ground even before the suspension. After taking corners in the second and third round of this year’s draft, the Buccaneers could be poised to move on from him and allocate his slated salary elsewhere.