Saints rookie defensive end Carl Granderson has been sentenced to six months in jail, according to The Casper Star-Tribune. Initially, Granderson was set to serve a year of probation, but a Wyoming judge went against the plea deal reached by prosecutors and Granderson’s attorney. 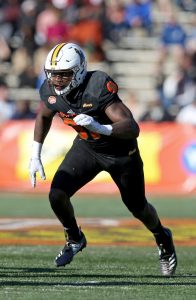 The Saints signed Granderson as an undrafted free agent despite his pending trial, but this sentence will completely rule him out for the 2019 season. It’s likely that Granderson will be released soon, with another player replacing him on the 90-man roster.

The Wyoming product is a talented player who almost certainly would’ve been drafted if not for his legal situation. Many analysts gave Granderson a mid-round grade and the Saints gave him a hefty $85K to sign this offseason.