The Titans just got dealt a big blow as training camps across the league open. Starting left tackle Taylor Lewan announced on Twitter that he’ll be suspended for the first four games of the season. 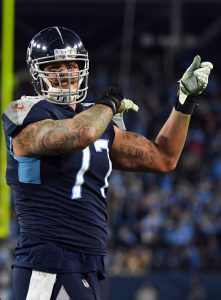 In a video explaining what happened, Lewan said he unknowingly took a substance banned by the league. Lewan forcefully denied taking it on purpose, and said he even took a polygraph test to prove it, the results of which he’ll be publishing shortly. Either way, it’s a huge loss for Tennessee.

Lewan has been a rock for them, starting at least 15 games in each of the past four seasons. Lewan filled in for six games as a rookie due to injuries, then took over the full-time starting job in his second year. He originally entered the league as the 11th overall pick back in 2014 and has blossomed into one of the league’s better tackles since, making the Pro Bowl in each of the past three seasons.

The Michigan product signed a five-year extension last summer that made him the highest paid offensive lineman in league history. The Titans open up the season with the Browns, Colts, Jaguars, and Falcons. While Lewan already announced the news himself, there is apparently a sliver of hope. Lewan’s ‘A’ sample tested positive, but his ‘B’ sample hasn’t come back from the lab yet, a source told Adam Schefter of ESPN.com (Twitter link). If the ‘B’ result comes back clean, Lewan could potentially be spared.