One of the league’s very best cornerbacks is on the block. The Jaguars seem willing and ready to move Jalen Ramsey, but they won’t deal him before Thursday night’s game against the Titans, sources tell Ian Rapoport of NFL.com (on Twitter). Instead, Rapoport hears that Friday is the “likely target date” for a trade. 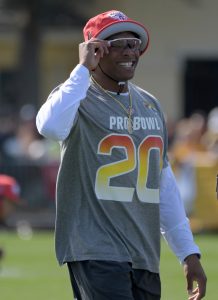 For a trade to come together between now and then, rival teams will have to step up their offers, or the Jags will have to reduce their asking price. Currently, the Jaguars are said to be seeking two first-round picks for Ramsey. Meanwhile, as far as we know, they’ve only received offers of one first-round choice from two different clubs.

Despite all the noise, Ramsey says he’s focused on balling out against the Titans.

“I have nothing bad or negative to say about anyone in the building. I don’t want to speak on it or give too much detail. I will let God do his work,” Ramsey said on Tuesday.

14 comments on “Jaguars To Trade Jalen Ramsey On Friday?”