The NFL’s meeting with Antonio Brown accuser Britney Taylor spanned 10 hours Tuesday, but the league does not have a timeline on potential discipline for the Patriots wide receiver, Mark Maske of the Washington Post reports. 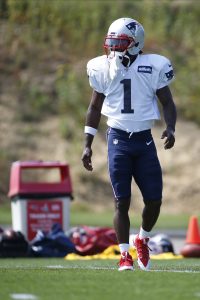 Taylor has accused Brown of multiple instances of sexual assault and filed a civil suit against the 31-year-old wideout. Brown has denied the allegations. Brown made his Patriots debut Sunday and remains on New England’s active roster.

Since Taylor’s suit, another woman has come forward accusing Brown of sexual misconduct. An unidentified artist Brown commissioned to paint a portrait of him at his Pittsburgh-area home said the then-Steeler approached her from behind while she was painting and did so with only a towel covering his genitals, Robert Klemko of SI.com reports. The artist said she met Brown at a National Youth Foundation charity auction. NYF co-founder Sophia Hanson told Maske she has not been contacted by the league and, to her knowledge, neither has the artist.

The second accuser is not pressing charges, Klemko adds. Brown’s attorney tweeted his client denies this accusation as well. Brown has not been charged with a crime.

Were Brown to be placed on the commissioner’s exempt list, he would still be paid but would be ineligible to join Patriots teammates for practices or games. The NFL has used this tactic during pending cases, though this matter is somewhat different given that it’s a civil case and not a criminal investigation.

The league’s investigation is expected to take months, per The Athletic’s Daniel Wallach (subscription required). So an exempt list decision could well be a defining moment for Brown’s 2019 season. Ultimately, Taylor’s testimony helps lead the legal reporter to the conclusion that Roger Goodell will place Brown on the exempt list soon.

21 comments on “Latest On Antonio Brown”