Melvin Gordon is in the building. On Thursday, the star running back halted his holdout to join the Bolts at their team facility, according to Ian Rapoport of NFL.com (on Twitter). 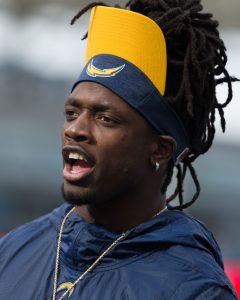 Gordon’s holdout was always viewed as unlikely to stretch the entire season. Per league rules, Gordon has to report before Week 10 in order to qualify for free agency next season. Early on, many thought that the running back would cut it close. That’s not the case – he’s ready to rock and reported to the team on Thursday. He won’t be suiting up for this week’s game, but he could be placed back into the lineup for the Chargers’ Oct. 6 showdown with the Broncos.

After missing three games, Gordon has lost out on $1MM of his $5.6MM salary for 2019. The Chargers may, or may not, rescind fines levied against him for the missed time.

More importantly – Gordon will be cashing paychecks the rest of the way and paving the way for free agent riches in March. From a football perspective, he’ll provide a major boost for the Chargers, who are presently 1-2.

Beyond this year, Gordon expects 2019 to be his last season with the Chargers, though he has previously indicated a desire to remain in L.A. Worth noting – Gordon was open to being traded to the Texans after they lost Lamar Miller to injury.