With James Develin set to miss tomorrow’s division matchup against the Jets, the Patriots have promoted another fullback. Michael David Smith of ProFootballTalk.com writes that New England has elevated Jakob Johnson to the active roster. The team had an open roster spot following yesterday’s release of Antonio Brown. 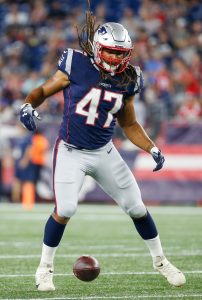 Hailing from Stuttgart, Germany, Johnson spent two years on the U19 team for the Stuttgart Scorpions of the German Football League. He moved to Florida for his senior year of high school, and he later played several seasons for the Tennessee Volunteers football program. He decided to return to the Scorpions for the 2018 campaign.

This past offseason, Johnson was signed as an undrafted free agent via the NFL’s International Player Pathway Program. He was released at the end of the preseason, but he quickly joined the Patriots practice squad.

Develin sat out three practices this week as he dealt with an upper back and neck injury. He’s currently considered week-to-week.