As expected, Raiders linebacker Vontaze Burfict will appeal his season-long suspension, agent Lamont Smith tells Ian Rapoport of NFL.com (on Twitter). If Burfict cannot overturn the ban, he’ll be sidelined for the remaining 12 games of the 2019 season. 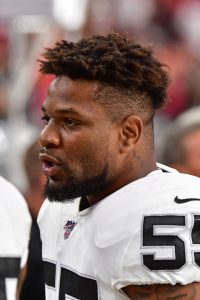 The NFL moved to keep Burfict off the field for the final 13 weeks of the ’19 campaign after he drove his head into Jack Doyle‘s helmet on Sunday. This is, by far, the lengthiest suspension ever levied against a player for an on-field infraction, so Burfict may have a good chance at getting the suspension reduced.

Obviously, Burfict’s history of rules violations is playing a big role here. Burfict has racked up 14 fines and/or suspensions from the league office throughout his career, including three league office penalties in 2018. Throughout his career, Burfict’s tenacity has been a major double-edged sword and source of controversy. He’s been one of the league’s most feared defenders for all of the right, and all of the wrong, reasons.

Regardless of what happens in his appeal, Burfict figures to be on extremely thin ice with the NFL moving forward. It’s worth noting that the veteran will be eligible for free agency once again in March, after the expiration of his one-year, $2MM deal with Oakland.