We heard earlier today that the Broncos were going to listen to trade offers for receiver Emmanuel Sanders, and it sounds like they’re going to do more than just listen. 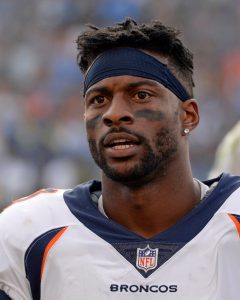 Denver is now “expected to deal” Sanders before the deadline, sources told Mike Klis of Denver 9 News. The Broncos lost a game to the Chiefs on Thursday, which was widely considered their last stand. Now that they’re 2-5, it looks like they’re going to become sellers. In a tweet, Klis notes that Sanders is “still in play” to suit up for Denver’s Week 8 game in Indianapolis, but that he “has likely played his last home game.” Sanders is 32 now and coming off a major injury, and it doesn’t look like the Broncos are ready to compete anytime soon.

There are a bunch of contenders out there who could use receiver help, including the Patriots, but it’s unclear what kind of compensation Denver will be able to get. Sanders missed the end of last season with an Achilles tear, but was able to make it back for the 2019 opener. He’s had a few big games but has also been completely left out of the offense at times.

Through seven games, Sanders has 30 catches for 367 yards and two touchdowns. Those are some not too shabby numbers, and he clearly has at least something left in the tank. The deadline is a week from this Tuesday, so we’ll know Sanders’ next destination soon. Sanders has been with the team since 2014, and had 1,404 yards and nine touchdowns in his first year with Peyton Manning under center. The Broncos look like they’re going to enter a rebuild, and it’ll be interesting to see what other moves they make. It’s definitely possible cornerback Chris Harris Jr. is shipped out.