Running back Kenyan Drake could be on the move. The Dolphins have had trade conversations about him with teams and they would be willing to deal him if the right offer presented itself, Ian Rapoport of NFL.com tweets. 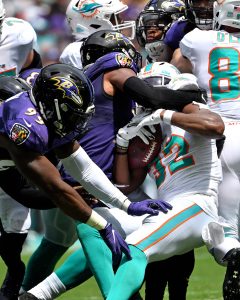 Drake was in extension talks with Miami not long ago, but there has been no momentum on that front since training camp. Meanwhile, Drake would welcome a new opportunity, RapSheet hears (video link).

A deal would make plenty of sense for both parties. Drake is playing out the final year of his contract, doing so for a Dolphins team that underwent a radical philosophy change this year. Miami is 0-5 and has one of the worst point differentials through five games in NFL history.

The former third-round pick out of Alabama has not rushed for 50 yards in a game this season and is averaging a career-worst 3.7 yards per carry behind one of the NFL’s worst offensive lines. The Dolphins still gave him a team-high 16 touches in Week 6 but used Mark Walton as their starter.

Drake, 25, totaled 1,012 yards from scrimmage last season. Despite sharing backfield duties with Frank Gore, Drake scored nine touchdowns in 2018. This may be a better way to evaluate the running back as opposed to judging his work on this year’s rebuilding Dolphin outfit. The Dolphins, though, are not under the impression they would get much back in a Drake trade. They received a fourth-round pick from the Eagles for Jay Ajayi in 2017.