The Giants have signed former Cardinals and Buccaneers linebacker Deone Bucannon, as Field Yates of ESPN.com tweets. The deal reunites the former first-round pick with James Bettcher, his old friend and defensive coordinator in Arizona. 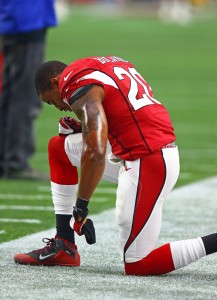 Bucannon offers some dual-position potential as a safety and, despite the ups and downs of his career, is still only 27. There’s upside here for the G-Men and little risk as this is likely a low-cost deal.

The Bucs also had some hope for Bucannon after inking him to an inexpensive one-year, $2.5MM pact. He didn’t do much to replace Kwon Alexander in his short run, however, and saw just eight snaps through five games.

Last year, Bucannon finished as one of Pro Football Focus’ worst-graded linebackers in a limited sample of 389 snaps. He’s still looking to reprise the 2015 season in which he broke out with 109 tackles, three sacks, and an interception.