Five days away from this year’s trade deadline, the Jets are ready to be sellers. Both Robby Anderson and Leonard Williams are available for the right price, according to Manish Mehta of the New York Daily News. 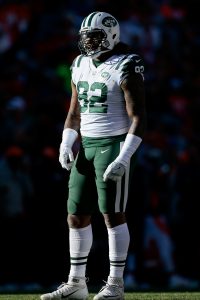 Both players are in the final years of their respective contracts, and the Jets are hoping to be sellers and add 2020 picks, per Mehta. Each Jets starter has surfaced in trade talks for a bit now, and the Jets tried to move Anderson before last year’s deadline. The Eagles were interested, but nothing materialized.

Williams is playing out a $14.2MM fifth-year option, while Anderson is attached to a second-round RFA tender worth $3.1MM. Neither is having a statistically productive season, though some of Anderson’s struggles can be traced to the Jets being without Sam Darnold for much of this season. Anderson led the past two Jet teams in receiving yards — 941 and 762, respectively — and produced a 125-yard game against the Cowboys in Darnold’s first game back. The deep threat will surely generate interest in the coming days.

The Jets have seen older wideouts produce strong trade returns this week. Anderson, 26, is four years younger than Mohamed Sanu and six years younger than Emmanuel Sanders. New York traded for Demaryius Thomas early in the season and has journeyman Josh Bellamy as an outside receiving option. With Anderson being a Mike Maccagnan-era investment, is is fair to assume he will not be in the now-Joe Douglas-run team’s plans after 2019.

The 2015 No. 6 overall pick, Williams has not recorded a sack this season and grades as Pro Football Focus’ No. 83 overall interior defender. Once rumored to be interested in extending Williams, the Jets are now reportedly seeking a package fronted by a third-round pick for the defensive end.