While the Patriots are sitting pretty at 6-0, it sounds like the organization is feeling a bit uneasy about their receiver depth. As Jeff Howe of The Athletic writes, the front office would like to add a wideout prior to the October 29th trade deadline. It’s uncertain if New England is currently engaged in trade talks, but Howe says it’s easy to assume that Bill Belichick and Nick Caserio have reached out to rival executives. 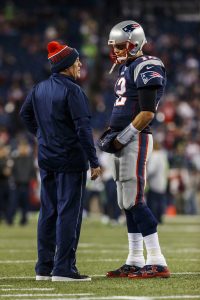 Julian Edelman (ribs), Josh Gordon (knee), and Phillip Dorsett (hammy) are currently dealing with injuries, and Tom Brady hasn’t looked comfortable throwing to anyone beyond that trio and running back James White. While rookie first-rounder N’Keal Harry could start practicing next week, Howe writes that the Patriots would prefer a receiver who could “instantly command a defense’s respect, alleviate Edelman’s burden and help Brady.”

So who is the team eyeing? Howe says there’s hope within the Patriots organization that they could pry wideout Stefon Diggs away from the Vikings. It’s uncertain if Minnesota would consider trading the star receiver (the front office has said they won’t), and a deal would likely require a first-rounder. If another team engages in Diggs trade talks, then New England may be required to give up even more draft capital.

Assuming the Pats don’t end up with Diggs, Howe suggests a number of names that could be of interest to the defending champs. The organization had previously shown interest in Broncos receiver Emmanuel Sanders and Falcons wideout Mohamed Sanu, and Howe also points to former Pro Bowlers A.J. Green and Larry Fitzgerald (although their availability seems unlikely). The rest of the writer’s potential targets include Nelson Agholor (Eagles), Randall Cobb (Cowboys), Allen Hurns (Dolphins), and even Demaryius Thomas, who the Patriots traded to the Jets back in September.

Complicating the Patriots’ pursuit of a receiver is their limited cap space; the team is currently sitting with $3MM. The team could clear up some room by extending Brady, Devin McCourty, or Dont’a Hightower. Considering the team’s front-seven depth, the Patriots could also consider trading defensive end Michael Bennett.