Raiders Looking To Trade For WRs

The Raiders are on the lookout for wide receivers as Tuesday’s NFL trade deadline approaches, Ian Rapoport of NFL.com hears (Twitter link). One possible target for Oakland, he hears, is Jets wide receiver Robby Anderson, who is one of several Gang Green players on the block. 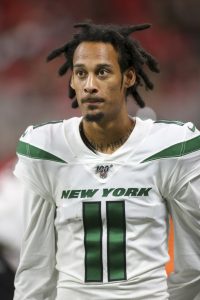 The Raiders already swung one October trade for a wide receiver when they brought in Zay Jones from the Bills, but their work might not be done. Besides Jones, the Raiders’ WR group includes Tyrell Williams, Dwayne Harris, Hunter Renfrow, Trevor Davis, Keelan Doss, and Marcell Ateman. They had Williams on the field this weekend, which is a positive development, but the Raiders’ No. 1 target came up short down the stretch in Sunday’s loss to the Texans.

On that front – quarterback Derek Carr says he’ll continue to send the ball in Williams’ direction.

“There are two or three that he wants back, but you guys know me. I’m going to keep throwing it to him,” Carr said. “When we had [Amari Cooper and Michael Crabtree] rolling, a drop didn’t matter. I was going to keep throwing them the ball. They are going to get chances. The ball is still coming with confidence…Whenever they want to single him up and make him beat us, we’re going to take that chance. There were probably two or three where I could’ve delivered a better ball or that he’d want back.”

If the Raiders can add another talented WR to the fold between now and tomorrow afternoon, Williams may benefit from some improved matchups.

14 comments on “Raiders Looking To Trade For WRs”