With the Bengals 0-5, trade rumors have surfaced regarding their veterans. Some execs believe A.J. Green could fetch Cincinnati a first-round pick, and the seven-time Pro Bowler returned to practice Thursday. But Green is not on the trade block. 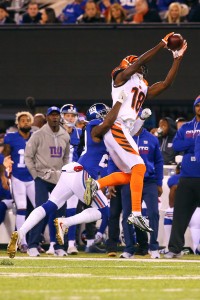 Zac Taylor confirmed Thursday the Bengals “are not trading that guy,” per The Athletic’s Paul Dehner Jr. (on Twitter). Less than three weeks remain until the Oct. 29 deadline, but the Bengals’ current stance stands to continue the franchise’s conservative nature on this front.

Green’s anchored the Bengals’ offense for nearly the entirety of the 2010s but has struggled with injuries over the past few years. The ankle/foot malady Green suffered in late July will cause him to miss Week 6. By Sunday, the 31-year-old wideout will have been absent for 19 of the Bengals’ past 41 games.

The only wide receiver to begin his career 7-for-7 in Pro Bowls, Green has one season remaining on his contract. He and the Bengals have tried for months to come to terms on an extension, but the sides have failed on this front. The Bengals re-signed Tyler Boyd earlier this year.

Going through a Larry Fitzgerald-type of career appeals to the Bengals’ ninth-year talent, and it appears Green will not have to worry about a midseason trade spoiling his chance of finishing his career with the team that drafted him. That said, the Bengals are well off the contention map and would almost certainly be able to recoup a Day 2 pick (at worst) for their top pass catcher. An argument exists for the team to move Green, but the traditional franchise is not ready to do consider it. This also raises the stakes for the Bengals completing an extension.