On Thursday, Antonio Brown lashed out at the NFL via social media and vowed to “never play” football again. Then, later in the day, he scrubbed those tweets and posts and told his followers that while he is “very frustrated,” he remains “determined” to return to the NFL. 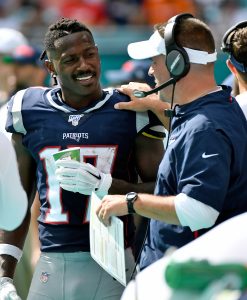 Brown was left in limbo for a long time by the NFL, but there’s finally movement in his investigation. The wide receiver will meet with the league next week to discuss allegations of sexual assault and, reportedly, Brown is eager to give his side of the story.

Brown, one of the most accomplished offensive players in NFL history, has been accused of sexual misconduct by two different women. Teams still want to sign Brown, but they’re looking for clarity on his situation (suspension or no suspension) before signing him. If Brown is not suspended by the NFL, he’ll stand as the biggest potential upgrade on the open market for the final stretch of the season.

Meanwhile, Brown is battling for nearly $40MM in lost wages from the Patriots and Raiders.

42 comments on “Antonio Brown “Determined” To Return To NFL”