Vikings assistant head coach/offensive advisor Gary Kubiak has no interest in returning to the head coaching ranks, as Chad Graff of The Athletic tweets. “That’s not for me anymore,” Kubiak said. 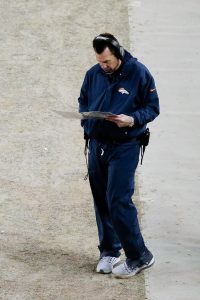 That doesn’t come as a major surprise, given that Kubiak stepped down from his last head coaching job with the Broncos due to health concerns, and his health was also an issue during the latter stages of his tenure as the Texans’ HC. However, he is on the sidelines for the first time since the 2016 campaign — he served as a senior personnel advisor for the Broncos during the 2017-18 seasons — and it was fair to wonder if he was getting the head coaching itch again.

On the other hand, Kubiak could return to an offensive coordinator role at some point. He was mentioned as a viable OC candidate following the 2017 season, and he was expected to accept the OC job with the Broncos after they hired Vic Fangio as head coach this year. But Kubiak and the Broncos couldn’t see eye-to-eye on staffing and offensive philosophies, which led him to take his current post in Minnesota.

And while he is obviously not solely responsible for the Vikings’ offensive output his year, the club’s performance is not hurting his reputation as an offensive guru. Minnesota currently ranks ninth in the league in yards-per-game and eighth in points-per-game, and quarterback Kirk Cousins is having a career year. So if Kubiak still wants an OC job, he may just get it.

8 comments on “Gary Kubiak Not Interested In HC Jobs”