07:56pm: Burnett underwent successful surgery today, per Adam Schefter of ESPN.com (via Twitter). He is expected to make a full recovery.

09:35am: Morgan Burnett‘s season is over. As feared, the Browns’ veteran safety tore his Achilles in Cleveland’s win over the Steelers on Thursday, and the club announced that it has placed Burnett on IR. 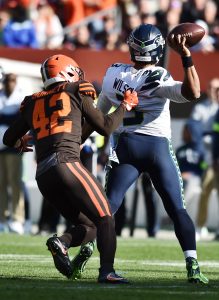 It’s an especially difficult blow for Burnett, who missed some time due to injury earlier in the season as well. But he played all of the Browns’ defensive snaps in Weeks 8 through 10, and he was having a great night against Pittsburgh in Week 11, piling up five tackles — including one tackle for loss — and a big interception before suffering the Achilles tear. Burnett had been relegated to a part-time role as a member of the Steelers in 2018, but he had returned to a starter’s workload with Cleveland.

The 4-6 Browns were already going to have an uphill climb to make the playoffs, but that task will be even more difficult without Burnett on the back end of the defense and without the suspended Myles Garrett in the trenches. The Browns already cut safety Jermaine Whitehead earlier this year after he went on a Twitter tirade, so they could look outside the organization for a replacement for Burnett (they did work out several safeties yesterday). If not, Eric Murray, Juston Burris, or rookie Sheldrick Redwine are the current internal candidates on the 53-man roster.

Cleveland has Burnett under club control through the 2020 season after signing him to a two-year, $7.5MM deal in April. He ends his first Browns season with 41 tackles, one interception, and two sacks.