Titans cornerback Malcolm Butler could be done for the season, head coach Mike Vrabel says (Twitter link via Jim Wyatt of the team’s website). Butler broke his wrist on Sunday and that could spell a bad break for the 4-5 Titans. 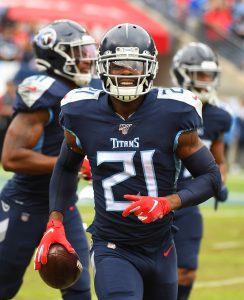 Surgery is a possibility for Butler, who is in Year 2 of a five-year, $61MM deal. So far this year, he has two interceptions and 32 tackles to his credit with starts in every game.

Butler landed awkwardly after trying to defend against Panthers wide receiver Curtis Samuel in the end zone. Samuel scored, Butler grabbed his wrist, and the Panthers went on to win 30-20.

The sixth-year veteran has started every game for the Titans over the past two seasons. This year, Butler ranks as Pro Football Focus’ No. 43 overall cornerback. The Titans have devoted considerable resources to this position, with Butler joining fellow eight-figure-per-year player Logan Ryan and recent first-rounder Adoree’ Jackson. The latter two will have to pick up the slack in Tennessee.