The Broncos and Lions are playing Sunday afternoon, and they apparently discussed a potential blockbuster trade a couple of months back. The teams discussed a swap of cornerbacks Chris Harris Jr. and Darius Slay, sources told Mike Klis of Denver 9 News (Twitter link). 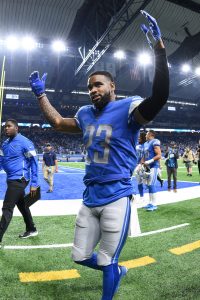 We had heard that the Lions were the only team to make a formal offer for Harris, but this is the first we’ve heard of Slay being included in those discussions. Klis adds that Detroit was asking for more in addition to Harris, which killed the talks. When big name players get traded in the NFL it’s usually for draft picks, so a deal centered around two star players of the same position would’ve certainly been unusual. Harris originally demanded a trade or extension back around the draft, which resulted in a weeks-long standoff between the two sides.

There were murmurs of a potential deal during draft weekend, but eventually Denver agreed to give him a raise on his 2019 salary while not adding on any additional years. As the Broncos once again got off to a losing start, his name came up in trade talks at the deadline.

The Eagles pursued Slay heavily at the deadline, but a deal couldn’t get done. We didn’t hear anything about him heading to the Broncos, although reports at the time indicated the Lions’ asking price was sky-high. Both corners are having down years, and while Harris is going to enter unrestricted free agency, Slay still has one more year on his deal.