It sounds like Eli Manning is back in the saddle as the Giants’ starting quarterback. At least, for one game. On Wednesday morning, head coach Pat Shurmur told reporters that Daniel Jones is in a walking boot with a mild high-ankle sprain, which means Manning will “very likely” start on Monday night against the Eagles. 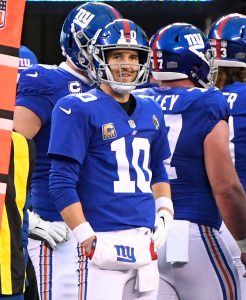 The Giants’ season is effectively over, but this will serve as an opportunity for the G-Men to bid farewell to their longtime star. And, for Manning, this will be a chance to show the rest of the NFL that he’s still a capable QB.

Manning says he plans on playing through at least the 2020 season, but it’s unlikely to be with the Giants. After calling New York home for 16 years, Manning will hit the open market in search of his next team.

In 2018, the 38-year-old raised his completion rate to a career-high 66% and his 7.5 yards-per-attempt average was considerably higher than it was in the previous two seasons. He also dropped his interceptions total (11) to the lowest its been during his 14 seasons a full-time starter.

His $23.2MM salary limited his trade appeal this year – and Manning wouldn’t have waived his no-trade clause, anyway – but there figure to be many QB-needy teams speaking with the future Hall of Famer in March.