With Eli Manning‘s contract coming off the books, the Giants will almost certainly be moving on from the likely Hall of Fame quarterback in 2020. As for Manning, he revealed some details about his thought process exiting his least active NFL season. 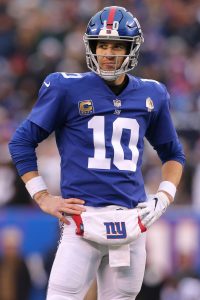 The soon-to-be 39-year-old quarterback will contemplate retirement and may well do so if there is no clear starting job available. No timetable exists for the younger Manning quarterback’s decision. Peyton Manning retired in March 2016 but was under contract with the Broncos at the time. Archie Manning has said multiple times this year he does not expect his son to play elsewhere, though it doesn’t sound like Eli has completely ruled that out.

“That will come into the consideration,” Manning said, via ESPN.com’s Jordan Raanan.”That is what I’ll be thinking about these next couple days.”

If Manning does decide he wants to pursue a 17th season, he does not sound interested in being Daniel Jones‘ backup in 2020. Going into a situation as another team’s backup also would not appeal to Manning, via Adam Schefter of ESPN.com (on Twitter). Manning threw a career-low 147 passes this season.

“I doubt it. I doubt it,” Manning said,, of the prospect of returning as a backup. “Backing up is not real fun. … Everything is an option. That is the first decision, whether I want to continue to play or not. That is what I will decide. I’ll just try to figure it out. I think I can still play.”

Even if Manning were to secure a starting job somewhere, said franchise would be in line to use him as a bridge passer. That scenario would probably lead to a similar season arc to 2019’s, when the Giants benched Manning after two games. There are several marquee quarterbacks who reside as free agents-to-be, but finding a true opening for Manning is difficult. And if retirement does commence, Manning added coaching is likely not in his future.