The Browns have “strong interest” in former Ohio State head coach Urban Meyer, Bruce Feldman of FOX Sports (on Twitter) hears. Meyer retired from coaching one year ago today, citing health issues, but he has been connected to multiple NFL teams in recent months. 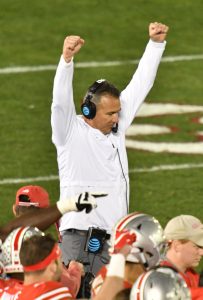 The Cowboys, Redskins, and Browns have all been linked to Meyer. The Redskins job, of course, is already spoken for – former Panthers head coach Ron Rivera inked a deal with the club before the New Year. The Cowboys, meanwhile, still have Jason Garrett as their head coach, as of this writing.

The Browns are casting a wide net in their coaching search but, as far as we know, they have yet to schedule an interview with Meyer, who is currently employed by FOX Sports (as is Feldman). Publicly, Meyer has downplayed the possibility of a return to coaching, but it sure sounds like he wants to make a jump to the pros.

The Browns’ head coaching search will be run by Paul DePodesta, the former baseball exec who serves as the Browns’ chief strategy officer. Today, they’ll chat with 49ers defensive coordinator Robert Saleh and they might also meet with offensive assistants Mike McDaniel and Mike LaFleur.

14 comments on “Browns Have “Strong Interest” In Urban Meyer”