Less than a year ago, Jason Witten came out of retirement to rejoin the Cowboys. But they now have a new coaching staff, for the most part, making the future Hall of Famer’s status less certain. 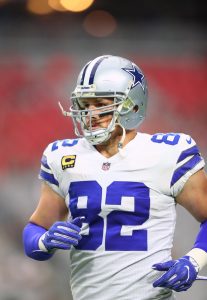 Witten has not committed to retiring or returning to the Cowboys for a 17th season. Preferring to stay in Dallas, the 37-year-old tight end has discussed his future with Jerry Jones and new Cowboys HC Mike McCarthy. But the player with the fourth-most receptions in NFL history acknowledged a Dallas departure is also possible.

“I realize I’m a free agent too in March. Any time a new staff comes together, I’ve played a long time, so I realize that may mean somewhere else too,” Witten said, via Jon Machota of The Athletic (on Twitter).

Among active players, Witten’s 255 games as a Cowboy are the second-most anyone has played with one team. He trails only Tom Brady (280 games as a Patriot) in this regard. Despite spending a year in the ESPN broadcast booth, Witten nearly duplicated his 2017 numbers by catching 63 passes for 529 yards and four touchdowns in a more explosive Cowboys offense.

Kellen Moore will return as Dallas’ OC and call plays, but Witten has worked with Jason Garrett in each of his past 12 seasons. A rumor circulated recently about Witten reuniting with Garrett in New York. The Giants, however, are better-positioned at tight end with Evan Engram and Rhett Ellison under contract in 2020. The Cowboys have Blake Jarwin (31 catches this season) as a restricted free agent.