Cardinals quarterback Kyler Murray caused a bit of a kerfuffle earlier this week when he indicated he still had interest in playing baseball at some point. “I think I could. … Athletically, I think yeah, I could do it. I’ve been playing both my whole life. I would love to add that to the resume,” he told Bob McManaman of the Arizona Republic (Twitter link). 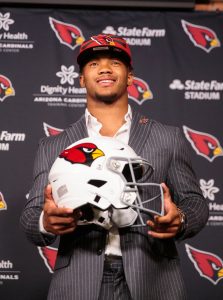 Fortunately for Cardinals fans, they don’t have to worry about that anytime soon. Murray’s NFL contract specifically bars him from pursuing his other sport in any form, according to Ian Rapoport of NFL Network (Twitter link). Rapoport reviewed the language of Murray’s deal, which rules out “any baseball related activity, tryout, workout, scrimmage, any exhibition, from any baseball team in any baseball league.”

Murray, of course, was previously a two-sport athlete. He was drafted early in the first round by the Oakland Athletics a few years ago, and until he took over for Baker Mayfield as Oklahoma’s starting quarterback, it was widely assumed he would pursue a MLB career. Then he ended up exceeding all expectations in his one season of college football, winning the Heisman Trophy. After leaving his future up in the air for a while, Murray eventually fully committed to football and announced he would withdraw from his deal with Oakland back in February of last year.

A couple months later, the Cardinals drafted him first overall. Murray had an up and down rookie season in his first year playing under Kliff Kingsbury, but he showed plenty of flashes. The potential Rookie of the Year, he finished with 24 total touchdowns and had some huge games. It isn’t totally unheard of for a player to compete in both sports, as Deion Sanders famously played in the NFL and MLB at the same time. That being said, it would be much tougher for a quarterback to attempt such a thing. Maybe one day Murray will find his way back to the diamond, but it doesn’t sound like it’ll be anytime soon.