Offensive coordinator Kevin O’Connell could keep his job under new head coach Ron Rivera, but the same can’t be said for Bill Callahan. The Redskins will move on from the offensive line coach and one-time interim head coach, according to John Keim of ESPN.com (on Twitter). 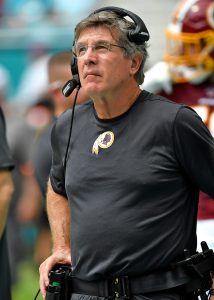 Callahan expressed interest in staying in Washington, though his comments came before the Rivera hire. It’s not clear if he would have been open to staying on as an assistant, however.

The Redskins went 0-5 under Jay Gruden and didn’t fare much better with Callahan at the helm. After a 3-8 showing in the final eleven games, they gave Callahan some consideration full-time post, but it might have been more of a courtesy than anything.

There should be plenty of opportunities out there for Callahan if he wants to serve as an assistant elsewhere.

25 comments on “Redskins To Part Ways With Bill Callahan”