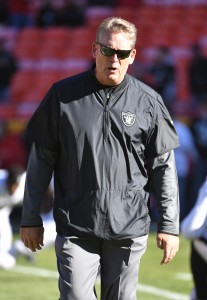 Del Rio, 56, was either a head coach or defensive coordinator in every NFL season from 2002-17. However, he’s been out of coaching since the end of the 2017 season, when he was canned as the Raiders’ head coach.

JDR’s Raiders posted a 12-4 record in 2016 en route to their first playoff berth in 14 years, but that campaign was sandwiched by two losing seasons. All in all, he went 25-23 as the Raiders’ HC and his defenses were spotty at best.

Before all of that, he was responsible for the Broncos’ defense from 2012-2014, a run that included two top 5 finishes. He also served as the Jaguars’ head coach for nine years. Del Rio took the Jaguars to the playoffs twice, including a 2007 season in which they toppled the Steelers in the playoffs before running into the Patriots in the divisional round.

JDR will have his work cut out for him in D.C. Last year, the Redskins finished 27th in points allowed and yards. On the plus side, they have lots young talent and some cap room to work with as they retool the defense.