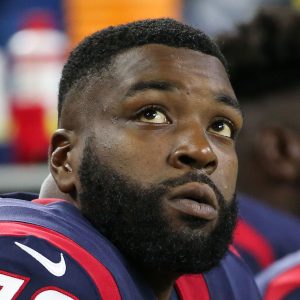 Early in his career, he started in 26 contests for the Bills between 2014 and 2015 and proved to be a proficient blocker. However, things took a turn in later seasons.

Henderson was hit with a ten-game substance abuse policy suspension in 2017, his second ban after previously serving a four-game suspension. For his part, Henderson says he was only using marijuana to help treat symptoms of his Crohn’s disease.

Henderson hooked on with the Texans in 2018 and earned a re-up for 2019. But, after Week 1, the 28-year-old was benched, then waived in November. Henderson went on to audition for the Bills, Seahawks, and Ravens, but was unable to find a new club.

The Redskins’ O-Line, without Trent Williams, still managed to perform decently as a unit. This year, new head coach Ron Rivera and new OL coach John Matsko will look to build upon that and they’ll have a healthy Brandon Scherff to help the cause.