Teams cannot technically contact free agent quarterbacks at the Combine, but discussions regarding passers on the trade market are fair game. The Bears appear to have begun investigating one of them.

The Bengals and Bears have been in contact about Andy Dalton, Paul Dehner Jr. of The Athletic notes (subscription required). Chicago is set to pursue a veteran passer to compete with Mitchell Trubisky; Dalton would certainly qualify as competition. 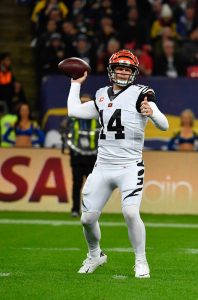 A nine-year Bengal, Dalton was demoted last season and is likely set to see his job go to Joe Burrow come April. The Bengals are willing to work with the contract-year quarterback on a trade. With the Bears having a quality defense that led their 2018 team to the playoffs, they may well qualify as a destination for a passer looking for a second chance.

Dalton is due a $17.5MM base salary in the final year of what has become a bargain-basement franchise-quarterback contract. The Bengals signed Dalton to a six-year, $96MM extension back in August 2014 and never extended it. One GM said the Bengals could fetch a second- or third-round pick for the 32-year-old quarterback, per The Athletic’s Lindsay Jones. The Bears hold two second-round picks but no first- or third-round selections, with 2018’s Khalil Mack trade reshaping Chicago’s 2020 draft.

The Patriots have also come up as a potential Dalton suitor, with some around the league envisioning that fit as a chess move for the Pats if Tom Brady departs. With that prospect looking likelier, the Dalton trade price could rise. The Bengals want to resolve this situation soon, but Dehner notes Brady’s decision will halt matters on the quarterback market.

Although Dalton struggled without A.J. Green and behind one of the NFL’s worst offensive lines last season, the three-time Pro Bowl alternate finished as QBR’s No. 17 passer in 2018. Dalton’s best years came in the mid-2010s, amid a five-season Bengals playoff streak. He threw 33 touchdown passes in 2014 and had a 25-7 TD-INT ratio in 2015 (fifth in QBR) before a season-ending injury. The Bengals, whose offensive line and pass-catcher situations worsened in the years that followed, have not produced a winning record since and seem set to move on from their nine-year starter.