Greg Olsen‘s free agency tour has come to an end after three stops, according to ESPN.com’s Adam Schefter (on Twitter). The tight end is currently in negotiations with the Bills, Redskins, and Seahawks, and he will not be meeting with any other teams. 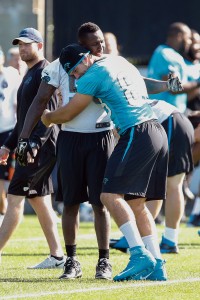 The Panthers parted ways with Olsen earlier this offseason in yet another signal that they are prepared for a total rebuild. This, of course, came weeks after the dismissal of longtime head coach Ron Rivera. Soon, the Panthers’ revamp may result in the release of one-time MVP quarterback Cam Newton.

Back to Olsen – the veteran has rebuffed numerous offers from multiple networks who are hoping to lure him into the broadcast booth. Instead, he’s intent on playing at least one more season in the NFL with an eye on contending for a championship. If winning is Olsen’s priority, one has to think that the Seahawks would be at the top of his wishlist.

The Bills and Redskins also hold appeal for Olsen, who will turn 35 in March. In Buffalo, Olsen could be a key part of the offense and siphon snaps from youngster Dawson Knox. With the Redskins, Olsen would get to rejoin longtime mentor Ron Rivera. Depending on how things shake out in D.C., it could even be a full-fledged reunion. The Redskins cut Josh Norman on Friday, but they could fill their void at cornerback by pivoting to James Bradberry, who spent the last four years in Carolina.

At this stage, Olsen is no longer a top-flight tight end. However, he was still reasonably productive last season and it’s clear that he still has some gas in the tank and fire in his belly. For his career, Olsen has notched 718 catches, 8,444 receiving yards and 59 touchdowns.