The Lions and cornerback Darius Slay continue to discuss a long-term deal, as Jeremy Fowler of ESPN.com tweets. However, it does not sound like the two sides are particularly close to an agreement, and Fowler says Detroit could look to trade the 29-year-old if a new contract is not in place in the coming weeks. 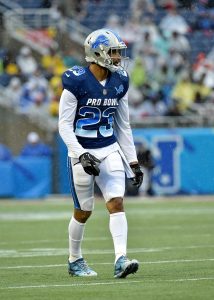 Of course, Slay’s name came up frequently in trade rumors in advance of October’s deadline, and he skipped voluntary and mandatory work last spring in an effort to get a new contract. He did report to training camp on time, but he was vocal about his displeasure over the team’s trade of Quandre Diggs, and shortly thereafter he said he didn’t care if he was traded himself.

But he walked back those comments (to some degree) about a week later, saying he would be open to spending his entire career in the Motor City. However, Fowler points out that the Lions and Slay have been working on a new deal for some time, and they still seem to have a fair amount of negotiating to do.

Since he plays a premium position and just earned his third consecutive Pro Bowl nod, Slay is surely aiming for a contract that will put him near the top of the CB market. That would mean a yearly rate of about $15MM and guarantees in the $40-50MM range. Slay’s current contract, which expires at the end of next season, would pay him $10MM in salary in 2020, with workout and roster bonuses that could push that figure closer to $10.5MM

In 2019, Slay picked up two interceptions, 13 passes defensed and 46 tackles.