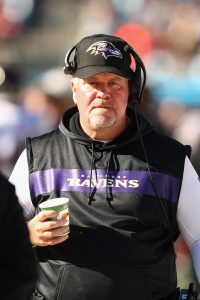 The Ravens reached an extension agreement with Martindale on Saturday, per Ian Rapoport of NFL.com (on Twitter). It’s a three-year deal that Rapoport’s sources initially said would make Martindale the league’s highest-paid DC, meaning that he would be taking home around $4MM per year (Sirius XM Radio’s Adam Caplan tweeted that 2019’s top DC salary was around $3.5MM).

Jason La Canfora of CBS Sports hears that Martindale was given a significant payday but that he will actually earn $3.25MM/year (Twitter link). Therefore, as Jamison Hensley of ESPN.com observes, Martindale is not the league’s highest-paid DC, but he is in the top 25% of his peers.

One way or another, he has been rewarded handsomely for his success in Baltimore. While the Ravens expect Martindale to be a top candidate on the 2021 head coaching carousel, they are taking care of him in the meantime.

Martindale has been with the Ravens for eight seasons, the past two as their defensive coordinator. After a slow start in 2018, his unit took off and became one of the league’s best. The Ravens ranked fourth in defensive DVOA last season, after their 2018 unit finished third in that metric.

Baltimore stayed on that level despite losing C.J. Mosley, Terrell Suggs and Za’Darius Smith in free agency. This helped Martindale book an HC interview with the Giants, and more interest will likely come Martindale’s way next year.

The 56-year-old assistant previously served as Baltimore’s linebackers coach for six seasons, a gig that helped him ascend back to the DC level after his previous time in that role — with the 2010 Broncos — did not go well. Denver’s 2010 defense ranked last in points and yardage, and Martindale did not coach in 2011. But he spent the bulk of the last decade becoming one of the NFL’s highest-regarded assistants, and the Ravens will have the luxury of using their Martindale-Greg Roman tandem to help forge another Super Bowl push next season.