Chris Hubbard looks like he will be staying in the fold for the Browns next season. Rumored as a departure candidate, the right tackle agreed to a new deal with the team. 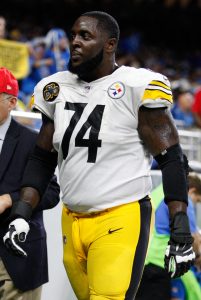 The Browns and Hubbard agreed to a reworked contract, with Field Yates of ESPN.com reporting (via Twitter) the sides now have a two-year deal in place. Hubbard was previously signed through the 2022 season; this revised contract has him signed only through 2021.

Hubbard’s 2020 base salary will drop to $2.15MM, and Yates adds only $1MM of that is guaranteed. A $1MM signing bonus is included in this new deal, though. Hubbard previously did not have any guaranteed money coming his way in 2020, but his base salary was to be $6.15MM. Hubbard still has a chance to hit $5MM in 2020 base salary, but Yates notes that is now a max-value figure rather than a base salary.

While this will create some cap space for the Browns, that was not previously an issue. Cleveland’s $46MM-plus in cap room entering Thursday led the NFL by a wide margin.

If Hubbard plays 90% of the Browns’ snaps, Yates adds that the 2021 year of his contract would void. This would put him on track for free agency in a year. It looked like Hubbard would be a 2020 cut candidate, having not lived up to the five-year, $36.5MM deal he agreed to during John Dorsey‘s first offseason as Browns GM. The Andrew Berry regime, however, will keep the right tackle around for the time being.

This will be Hubbard’s age-29 season; the ex-Steeler has started 29 games for the Browns since coming to Cleveland in 2018. Hubbard graded as a bottom-10 tackle last season, per Pro Football Focus. The Browns have yet to replace either of their starting tackles, having indicated they are moving on from Greg Robinson. They have been linked to Trent Williams but also loom as a candidate to draft a tackle in the first round.