We heard a couple of days ago that the Jaguars were looking to ship out Nick Foles, but that might not be entirely accurate. While they are going to listen in trade talks, Jacksonville is “not shopping” Foles, sources told Mike Garafolo of NFL Network (Twitter video link). 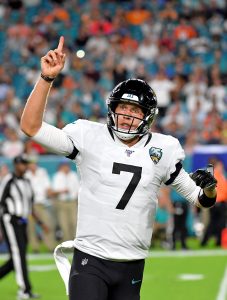 However, Garafolo does caution that the quarterback could still certainly be traded. He also reports that multiple teams have reached out to the Jaguars and expressed interest in Foles. The previous report indicated that the Jags would have a tough time finding a taker for Foles’ contract and might have to add something to sweeten the deal like in the infamous Brock Osweiler trade, but Garafolo says that Jacksonville will need to receive compensation from a team to move him.

Those are obviously conflicting sentiments about Foles’ trade value, and as always the truth could lie somewhere in between. No matter what a deal would look like, it’s notable that teams are reaching out. Garafolo notes that Foles is currently slated to compete with Gardner Minshew to be the team’s starting quarterback, and he speculates that Foles himself would welcome a fresh start.

Foles will count for more than $22MM against the cap next season, and a team would have to take a $12.5MM cap hit if they wanted to move on from him after 2020. Foles obviously wants to be a starter, but that might be prove to be tough. It’s an unusually crowded year on the veteran quarterback market, and plenty of guys will be ahead of him in line to find new homes. He’s also perhaps too high profile and too expensive for any team to want him as a backup, so it’ll be very interesting to see what happens here.