The Panthers signed not only Robby Anderson but also Seth Roberts and Keith Kirkwood in free agency. Considering the high-profile players who have left the team this offseason, it would certainly not surprise if the Panthers looked to deal one of their Ron Rivera-era wide receivers. 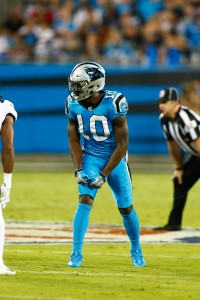 While Matt Rhule‘s Panthers are believed to be open for business, they do not have Curtis Samuel on the trade block presently, Joseph Person of The Athletic notes (subscription required). The Panthers are interested in keeping as many weapons as possible around for Teddy Bridgewater, Person adds.

Samuel is entering his contract year. The 2017 second-round pick now profiles as Carolina’s No. 3 wideout — behind Anderson and D.J. Moore. Considering Samuel’s $1.2MM 2020 salary, he would generate interest — even on a market that has seen the 2020 rookie receiver class affect veteran wideouts’ stock.

Samuel is coming off his best season, having caught a career-high 54 passes for 627 yards and six touchdowns. He has also contributed as a gadget-type player, logging 31 touches in the run game in his career.

This stands to be a key year for the Ohio State product, with Moore likely residing higher in Carolina’s extension queue and Anderson having an extensive history with Rhule from their Temple days. Samuel could be playing for a 2021 free agency payday. But for now, he will be expected to serve as an auxiliary option for Bridgewater in Joe Brady‘s offense.