After an abbreviated run in the XFL, P.J. Walker drew interest from several NFL teams. But he will reunite with his former coach. 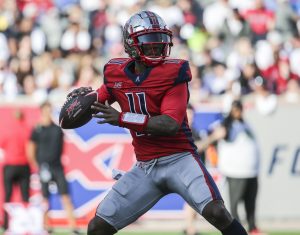 Walker will sign with the Panthers, Tom Pelissero of NFL.com tweets. The recent Houston Roughnecks standout played for Matt Rhule at Temple. This will mark another NFL opportunity for the former UDFA quarterback, who will receive a $150K signing bonus, per Aaron Wilson of the Houston Chronicle (Twitter link).

Monday marks the first day NFL teams can sign XFL players. While it is unclear how many will have markets, Walker did well for himself in the rebooted league. He generated interest from the Broncos, Cardinals and Seahawks and will have a chance to become the Panthers’ backup quarterback behind Teddy Bridgewater. Though, this crowds the Panthers’ quarterback group.

Walker, 25, guided the Roughnecks to a 5-0 start. He threw 15 touchdown passes and four interceptions, completing 66% of his passes. The XFL ended its season early because of the COVID-19 pandemic and freed up its players to sign NFL deals. Previously, XFLers could not sign until after the league’s season ended.

Walker was Temple’s starter for four seasons, from 2013-16. Rhule was the Owls’ coach throughout that span. Despite Walker being unable to catch on with an NFL team’s active roster previously, his history with Rhule points to a good shot at sticking around in the league this time. The Panthers, however, still have primary 2019 starter Kyle Allen under contract. They also used a third-round pick on Will Grier last year. The team recently extended Allen and has Grier signed through 2022. Rhule not drafting Grier, however, could play into the team’s plans.

While he was on track to be the XFL’s second MVP, Walker has enjoyed NFL opportunities previously. He bounced on and off the Colts’ practice squad in 2018-19. The Colts cut Walker from their P-squad in September of last year. No other team signed him, but he remade himself into an intriguing commodity during XFL 2.0’s shortened season.