Hours after agreeing to terms with XFL standout P.J. Walker, the Panthers are unloading a quarterback they just extended. The Panthers have agreed to trade Kyle Allen to the Redskins, Tom Pelissero of NFL.com tweets. 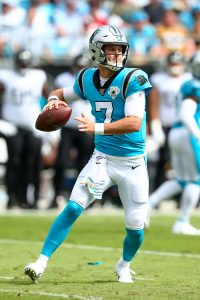 A 2018 UDFA, Allen was the Panthers’ primary starter last season under Ron Rivera. He signed an extension March 10. Washington will send a fifth-round pick to Carolina for Allen, Ian Rapoport of NFL.com tweets.

This will not only reunite Allen with Rivera, but the Redskins have former Panthers QBs coach Scott Turner on board as offensive coordinator. Turner was on Carolina’s staff for each of Allen’s two seasons with the team.

Allen, 24, will clear a path for Walker to make the Panthers’ roster and fill a Redskins need. With Alex Smith‘s status still uncertain, Washington now has a healthy quarterback set to join Dwayne Haskins. While the Redskins have been linked to Tua Tagovailoa, they are still the frontrunners to draft Chase Young. Washington has also been connected to trade-down maneuvers, with Tagovailoa and Justin Herbert drawing interest from other teams. Allen would stand to be Washington’s QB2 of the moment, and in an offseason that is unlikely to feature any OTAs, the Texas A&M product’s familiarity in Turner’s system will be critical.

Taking over after Cam Newton‘s September re-injury, Allen started strong but faded down the stretch. He ended his season with a 17-16 TD-INT ratio, 3,322 passing yards in 13 games and a 62% completion rate. Walker and Will Grier now stand to be Teddy Bridgewater‘s backups.

28 comments on “Panthers To Trade QB Kyle Allen To Redskins”