Anthony Harris In “No Rush” To Sign Vikings Tag

Anthony Harris is in “no rush” to sign franchise tag, according to a source who spoke with Chris Tomasson of the Pioneer Press (on Twitter). The Vikings and the safety have until July 15th to hammer out an extension, and Harris is gunning for long-term security. Tomasson hears that some talks could take place before the draft gets underway on Thursday night, but it’s unlikely that anything will be hashed out soon. 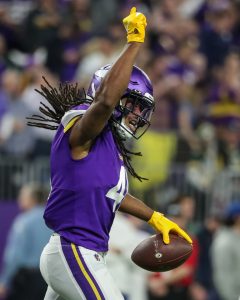 Harris, 28, was tagged back in March, but many figured that he would be a tag-and-trade candidate. That still remains a possibility, but GM Rick Spielman claims Harris is very much in their plans for 2020.

“I know we have some big changes in the secondary,” Spielman said this week, referencing the departures of Xavier Rhodes, Trae Waynes, and Mackensie Alexander. “One of the things — not only is Anthony Harris a great football player for us, and great in the community — but by us being able to franchise Anthony, we do have the safeties pretty well set, knowing that we’re going to have a lot of young corners we’re going to have to line up and play with.”

Either way, safety is on the Vikings’ to-do list this weekend, because they need to find support for Harris and Harrison Smith.

According to Pro Football Focus’ advanced metrics, Harris has been a top-five safety in each of the last two seasons, including exceptional coverage grades last year. Between 2018 and 2019, he’s totaled nine interceptions, 17 passes defended, and 106 tackles.