Earlier this month, Hunter Henry signed his one-year franchise tender worth roughly $11MM. At one time this offseason, the tight end says that he was “close” with the Chargers on an extension that would have locked him in for longer (Twitter links via Daniel Popper of The Athletic). 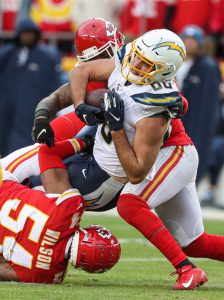 [RELATED: Chargers Would Have Been Happy With Tua Or Herbert At No. 6]

“We’re gonna try to extend and get something long term,” Henry said, before adding that he never considered a holdout.

Per the terms of the franchise tag, the two sides have until the July 15th deadline to hammer something out. If a deal doesn’t come together by that point, they’ll have to table negotiations until early 2021, after the season is through.

There’s clearly mutual interest in a long-term deal, but it won’t come cheap for the Bolts. This year, the Browns made Austin Hooper the highest-paid tight end in league history with a four-year, $42MM free agent deal. That’ll be a reference point for Henry and his reps, and the asking price will only increase once George Kittle inks his deal with the 49ers.

Henry missed all of 2018 with a ACL tear and also lost a quarter of the 2019 season with a knee injury. Despite that, GM Tom Telesco cuffed Henry with the franchise tag, making him the first tight end to receive the tag since Jimmy Graham way back in 2014.

In his 12-game campaign, Henry still managed career highs in catches (55) and yards (652). Both sides are incentivized to get an extension completed this year, but Henry would have an obscene amount of leverage in talks if he played out the year at 100% health and replicated that production.

10 comments on “Chargers, Hunter Henry Were “Close” On Extension”