Chargers Liked Tua Tagovailoa At No. 6

With the No. 6 pick in the NFL Draft, the Chargers found their new quarterback in Oregon product Justin Herbert. But, even if wasn’t there, GM Tom Telesco says he would have taken a QB, no matter what. 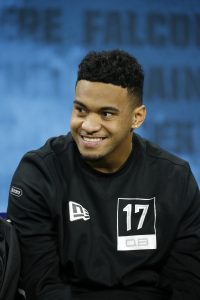 “We felt great about all three quarterbacks who went in the Top 6,” Telesco told Pat McAfee of Barstool Sports (Twitter link), referring to No. 1 overall pick Joe Burrow and Dolphins choice Tua Tagovailoa. “Hopefully we won’t pick at No. 6 very often…if I do, I won’t be making very many picks here. If you’re going to pick this high and there’s a potential franchise quarterback, you have to take him.”

Burrow to the Bengals was long considered a sure thing and Tagovailoa was connected to the Dolphins for months. As the draft drew closer, whispers of the Dolphins’ interest in Herbert grew louder and louder. And, days before the draft, there was talk of the Dolphins trading up to the No. 3 pick to select an offensive lineman, rather than a quarterback. That’s one rumor that Telesco didn’t bite on.

“Every rumor I heard, I went through my head of, ‘How would we handle this if this happened?’,” Telesco told Pat McAfee. “Now, the whole, Miami taking a tackle at 3, maybe they really were, I just didn’t believe that one. You make plans, you talk with your head coach…you talk about trading up or down in certain situations. When you’re on the clock making the pick, you’re not discussing what you want to do, you’ve already decided.”

The opinions on Herbert are pretty mixed in the football world. Those that are high on him believe that his elite arm strength will allow him to succeed as a starter. Others are concerned about his pension for holding on to the ball for too long in the pocket. At the same time, Tagovailoa’s health remains a major question mark moving forward and Telesco says he would have been happy with either QB as the heir to Philip Rivers.

34 comments on “Chargers Liked Tua Tagovailoa At No. 6”