The Dolphins have been linked to a first-round quarterback in this draft since before the 2019 draft. After a 5-11 season preceded Philip Rivers‘ departure, the Chargers have been mentioned as a prime QB landing spot as well. But it may not be a lock both teams pull the trigger near the top of the draft. 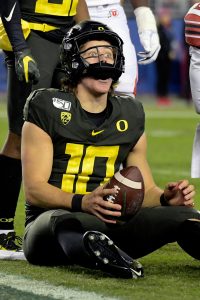 Buzz has swirled about both Miami and Los Angeles passing on quarterbacks at Nos. 5 and 6 overall, Albert Breer of SI.com notes, adding that tackle may be each team’s fallback choice. Both franchises possess a need at tackle, and each would be in line to land one of the draft’s coveted prospects at this position.

For the Dolphins, this would be a fascinating strategy. They also hold the Nos. 18 and 26 overall picks, which would fall in Jordan Love territory. The team brought Love in for a visit — before the NFL nixed that process — and other teams believe the Dolphins’ interest in the Utah State product is genuine. A Monday report also indicated Justin Herbert — whom the Dolphins have done extensive work on — is not in consideration at No. 5. Pro Football Network’s Tony Pauline pointed to the Fins picking Tua Tagovailoa or a non-quarterback there.

The Bolts are believed to be fans of both Herbert and Tagovailoa, and their timetable is further along than the Dolphins’. Los Angeles signed three 30-something starters — Chris Harris, Bryan Bulaga and Linval Joseph — this offseason and have a veteran group of skill-position players. For what it’s worth, Breer mocks Herbert to Miami and Tua to L.A. But if the teams go elsewhere, that would open the door to craziness atop the draft. Anthony Lynn has spoken highly of Tyrod Taylor as a legitimate starting option. Taylor has not been a full-time starter since his time in Buffalo, where Lynn coached him for part of his tenure.

Additionally, Breer notes that 49ers running back Tevin Coleman and Colts cornerback Quincy Wilson have surfaced as potential trade candidates. With Matt Breida also emerging as a possible trade chip, it seems this might be an either/or setup alongside Raheem Mostert next season in San Francisco. One year remains on Coleman’s two-year, $8MM deal. Wilson has not panned out for the Colts, who took him in the 2017 second round. One year remains on his contract. Indianapolis, which has not used Wilson as a starter since 2018, added both Xavier Rhodes and T.J. Carrie this offseason.