It’s no secret that the Eagles could use some help at wide receiver. But, with expensive WRs already under contract, they had to stay out of the fray in free agency. Now that the draft is less than a week away, they’re expected to make at least one significant investment at the position. 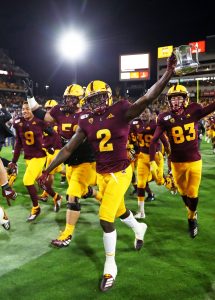 In addition to being in the mix for LSU playmaker Justin Jefferson, the Eagles are interested in Arizona State’s Brandon Aiyuk, Adam Caplan of InsidetheBirds.com notes. They join a list of teams who are not concerned about the core muscle surgery Aiyuk underwent earlier this month. Aiyuk is expected to be ready to go by June, per Caplan.

Philly has also done “a lot of work” on TCU’s Jalen Reagor, Caplan adds. Despite recently posting multiple sub-4.3-second 40-yard dash clockings, Reagor figures to be available by the time the Eagles’ No. 21 pick arrives. Jefferson, however, may not be.

Scouts Inc. rates Aiyuk 20th and Reagor 45th overall. ESPN’s Mel Kiper Jr. has Aiyuk going off the board 20th and Reagor 55th. Following their 21st overall pick, the Eagles’ next draft window opens at No. 55. They used the No. 57 overall pick last year on JJ Arcega-Whiteside, who underwhelmed as a rookie. Though unlikely, the Eagles going wideout in both the first and second rounds should not be dismissed, Les Bowen of the Philadelphia Inquirer writes.

If the Eagles want to aim for Jerry Jeudy or CeeDee Lamb, they would almost certainly have to trade up. That would probably need to happen to acquire Alabama speedster Henry Ruggs as well.

The Eagles have Alshon Jeffery and DeSean Jackson under contract beyond 2021, but each 30-something’s salary becomes much easier to shed next year. Whoever the Eagles draft next week figures to be a key component in their post-Jeffery/Jackson future.