In September, the Eagles agreed to guarantee the bulk of Alshon Jeffery‘s 2020 base salary. One month later, they were already looking to trade the wide receiver, according to Jeff McLane of the Philadelphia Inquirer. 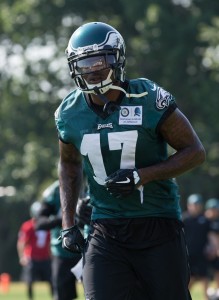 Eagles GM Howie Roseman was looking for an exit strategy as Jeffery’s production dropped and his injuries piled up. In the fall, Jeffery was also accused of anonymously ripping into quarterback Carson Wentz and other teammates through the press.

Jeffery quickly found out that he was on the block and that only furthered the divide between him and the team. The trade deadline came and went without a taker for Jeffery – he remains on the roster today and Roseman is still looking for a way out.

“Obviously, the elephant in the room is Alshon,” Roseman said during a recent conference call. “Alshon’s got to get healthy. That’s the No. 1 priority for us and for him. He understands. He knows what’s being said about him. He understands that he has a lot to prove and he’s anxious to do that. So he’s not living in a bubble.”

Right now, it’s hard to see the Eagles finding a trade partner for the mercurial and oft-injured Jeffery. With more guaranteed money on the way, the Eagles would have to eat a big chunk of his salary in order to facilitate a trade, meaning that they’d get little value in return.

At this point, the Eagles can only hope to smooth things out with Jeffery, especially with DeSean Jackson coming off of a core muscle injury.