The Titans letting Derrick Henry play on the franchise tag and giving him upwards of 300 touches before reassessing his value down the line would an interesting approach. Three teams reached tag-and-trade agreements last year. But the Titans want to sign the reigning rushing champion to an extension. 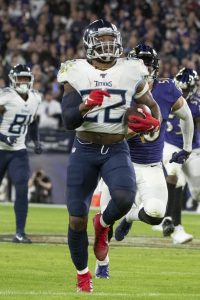 Jon Robinson met with Henry before the Titans used their franchise tag on him and has spoken with the four-year veteran since applying the tender, the Tennessee GM said Wednesday. Henry said, per Robinson, he wants to stay in Tennessee long-term.

While Robinson added that he wants to revisit talks before training camp, he has no choice. The Titans have until July 15 to reach an extension agreement with Henry. The 26-year-old back is currently attached to a $10.3MM franchise tender, though he has yet to sign it. If no deal is reached by then, Henry will count $10.3MM on the Titans’ 2020 payroll.

These will be interesting negotiations, given what has happened to the top tier of the running back market since Todd Gurley raised the salary bar. Gurley and David Johnson are on different teams, and Le’Veon Bell is coming off a disappointing Jets debut season. Ezekiel Elliott still leads the running back pack, at $15MM AAV, and made the Pro Bowl last season. But the Cowboys’ deal is the outlier presently.

Despite Elliott and Henry coming into the league in the 2016 draft, the former has a whopping 1,358 career touches. Henry, who split time with DeMarco Murray during his first two seasons, has accumulated only 861. Henry’s workload figures to factor into his negotiations with the Titans, who reached a long-term agreement with Ryan Tannehill and kept their bruising back off the market via the tag. As does his place on a run-heavy Titans team. A tag-and-trade scenario might not benefit the Titans, with Henry likely being more valuable in their offense than he would be elsewhere. Counting Henry’s tag price, the Titans hold just more than $23MM in cap space.