When the Lions reconvene, they will add an interesting player to their wide receiver corps. Jamal Agnew will fully transition from cornerback to wideout this year, Dave Birkett of the Detroit Free Press notes. 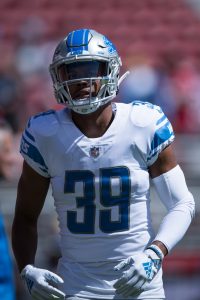 Known mostly for his work as a return man, Agnew began sitting in on wide receiver meetings last season and has been involved in virtual wideout and cornerback meetings this offseason. When the Lions gather for training camp, the plan is for Agnew to work exclusively at receiver.

Picked in the fifth round out of San Diego in 2017, Agnew is entering a contract year. He has four return touchdowns and secured first-team All-Pro honors as a punt returner as a rookie. Agnew played cornerback with the Toreros in college.

For his NFL career, Agnew has seen spot duty on offense. He has four career carries and three career catches. The versatile 25-year-old talent played 16 offensive snaps last season. That number could well increase this year, though Birkett adds that the fourth-year performer will enter training camp on the roster bubble.

The Lions return their top four wideouts — Kenny Golladay, Marvin Jones, Danny Amendola and Marvin Hall — and drafted Quintez Cephus in Round 5. Detroit also drafted running back Jason Huntley, who is expected to compete with Agnew for return work. Agnew has served as the Lions’ primary kick and punt returner since 2017.

20 comments on “Lions To Move Jamal Agnew To WR”