The Titans will decline Corey Davis‘ fifth-year option, according to Tom Pelissero of NFL.com (on Twitter). The wide receiver is now on course for unrestricted free agency following the 2020 season. 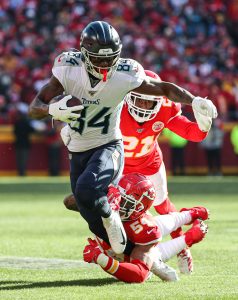 Davis was the first of three wide receivers selected in the 2017 NFL Draft. Unfortunately, the No. 5 overall pick has yet to realize his potential at the pro level. He showed promise in 2018 with 65 catches, 891 yards, and four touchdowns (all career highs), but he regressed last year. In 2019, Davis finished out with just 43 grabs for 601 yards and two TDs. For his career, Davis has found pay dirt only six times.

The option would have paid Davis $15.68MM in 2021, far too much given his track record. Instead of guaranteeing his year for injury at an exorbitant rate, the Titans will let the year play out and take it from there.

Meanwhile, the Titans have exercised the fifth-year add-on for cornerback Adoree’ Jackson, the No. 18 overall pick in the ’17 class.