Former Chiefs and Cardinals defensive tackle Xavier Williams headed east for a workout. The Patriots brought in the veteran lineman for a mid-camp audition, Mike Reiss of ESPN.com tweets. 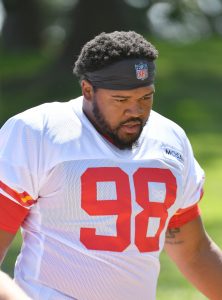 The Patriots are currently down Beau Allen, an offseason acquisition who has missed each of the team’s practices this week. Williams would add to a Pats line that lost Danny Shelton this offseason.

A Northern Iowa product, Williams spent the past two seasons with the Chiefs. The 28-year-old defender collected a Super Bowl ring last season, returning from IR late in the season to play in two of the Chiefs’ playoff games. A high ankle sprain sidelined Williams for much of 2019.

The former UDFA caught on with the Cardinals in 2015. He signed a restricted free agent offer sheet with the Chiefs in 2018, which the Cards refused to match, and played 36% of Kansas City’s defensive snaps that season.