Richard Sherman has done well to revitalize his career in San Francisco, earning second-team All-Pro acclaim last season while helping the 49ers back to the Super Bowl. Sherman confirmed Thursday he wants to keep playing after his 49ers contract expires. 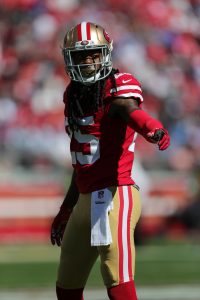 While Sherman’s 49ers deal wraps up after the 2020 season, the standout cornerback said he has discussed an extension with the 49ers, per Cam Inman of the San Jose Mercury News (on Twitter).

Sherman, 32, is hoping to play four more seasons. He is set to make $8MM in base salary this year and count nearly $14MM toward the 49ers’ 2020 cap. The former Seahawks All-Pro signed a self-negotiated three-year, $27.15MM deal in 2018. As his own agent, Sherman has put those talks on hold going into the season, per NBC Sports Bay Area’s Matt Maiocco (on Twitter).

With Jalen Ramsey just blowing the lid off the long-stagnant cornerback market, Sherman can reasonably aim for a substantial raise from his $9MM-AAV 49ers pact. He graded as Pro Football Focus’ No. 2 overall corner last season, returning to top form after two down seasons — one of which including an Achilles tear that ended his Seattle run.

San Francisco opted not to significantly address its cornerback corps this offseason. The team has Sherman, high-end slot corner K’Waun Williams and Ahkello Witherspoon going into contract years, pointing to the position being high 49ers priority in 2021.