It would seem that the 49ers are interested in former Lions and Seahawks defensive end Ziggy Ansah. The club met with Ansah last month, and as Ian Rapoport of NFL.com reports, Ansah will be back in San Francisco today to undergo COVID-19 testing in advance of a workout on Tuesday (Twitter link). 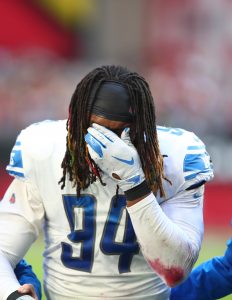 Though Ansah’s salary is unlikely to be particularly large, it would not be surprising to see interest in his services pick up after Week 1 in order to prevent that salary from becoming fully guaranteed. The 49ers are trying to prevent other clubs — like the Ravens and Bills, who are reportedly interested in Ansah — from swooping in to sign the 31-year-old.

Though the 49ers have several high-profile talents that can wreak havoc off the edge, like Nick Bosa and Arik Armstead, Eric Branch of the San Francisco Chronicle says the club is “starving” for pass rush depth (Twitter link). Ansah certainly fits the description of a high-reward, low-risk pickup that could provide a jolt to the Niners’ DE rotation.

The No. 5 overall pick of the 2013 draft, Ansah posted a double-digit sack campaign as recently as 2017. A shoulder injury marred his 2018 season and delayed his 2019 debut, but he is now another year removed from that injury, so while he may not be the sack leader in anyone’s locker room at this point, he may still be able to provide starter-caliber play.

The 49ers kick off their season against the Cardinals this afternoon and will hope that their current group of edge defenders can make life difficult for Arizona QB Kyler Murray.

One comment on “49ers To Host Ziggy Ansah For Second Time”