The 49ers lost to the Eagles on Sunday Night Football to fall to 2-2 and the basement of the NFC West, and the bad news doesn’t stop there. San Francisco fears pass-rusher Ziggy Ansah, who left the game with an arm injury, suffered a torn biceps, a source told Ian Rapoport of NFL Network (Twitter link). 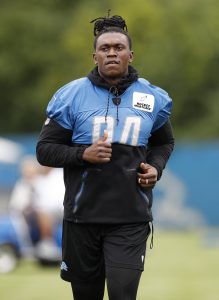 An MRI is need to confirm but if that’s the case, then Ansah is likely done for the year. It’s a tough blow to a 49ers defensive line that has been decimated by injuries. The defensive front was the engine behind their Super Bowl run last year, and the unit is now completely unrecognizable. All-Pro DeForest Buckner was traded to the Colts this offseason, and Nick Bosa and Solomon Thomas are both done for the season after suffering torn ACLs.

Ansah was brought in as a splash signing to help replace those guys, and now it looks like he’ll be shutdown as well. Ansah and the 49ers flirted for a while with a couple meetings taking place before the two sides finally agreed to a $3MM deal a couple of weeks ago. Picked fifth overall by Detroit in 2013, he had 12 sacks in 2017 but his past couple of seasons have been derailed by injuries.

He appeared in 11 games with the Seahawks last year, racking up only 2.5 sacks. He’ll be 32 in May and given his frequent recent health issues, will likely have a quiet market this offseason. He’ll almost certainly have to settle for a one-year prove it deal like he did this time.

With Dee Ford also on injured reserve, the 49ers are running out of pass-rushers. At risk of taking a backseat to the Seahawks and Rams in the division, it wouldn’t be surprising to see GM John Lynch make another move for a veteran in the coming weeks to try to give defensive coordinator Robert Saleh some reinforcements.